This is a tale of three pairs of shoes, and the trials and tribulations they have caused in the past six months.

Its amazing how complacent you can become about essential pieces of kit like this; when they’re working for you, you don’t even think about it. When they don’t, it’s a nightmare, and if you read on you’ll find out why.

Prior to reading – Please note I am not sponsored by Giro

As you can see by the state they’re in, these are the old workhorses on the trio. They’re well over three years old, have been cleaned about once a year, and served me well for training ’til they were replaced and relegated to commuting duties

I love these shoes, light and super stiff, the design of which was stolen by Rapha for their ‘climber’s shoes’, which somehow enabled them to charge about £100 more than Giro do. I got these about three months before Haute Route 2015.

Despite loving these shoes, they basically killed my left foot when in the Alps for Haute Route. The high cut of the top strap, when combined with the massive miles, heat and time out of the saddle at the event, lead to excess rubbing on the tendon across the top of my foot, where it meets the shin. The relentlessness of the riding and inability to rest between days lead to tendinitis in the area, which soon healed after the event.

However, the repercussions were wider… the rubbing and tendinitis also lead to a build of scar tissue above the tendon. At it’s worst it was around the diameter of a 5 pence coin, and a few mm high. You can sort of make it out to the left / below (this pic was taken in November; it was worse back then 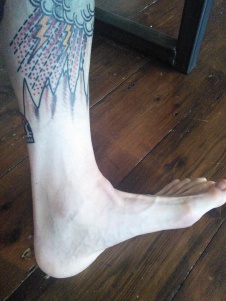 Since Haute Route, I’ve been trying everything to get rid of the scar tissue. Excess pressure on the lump from cycling shoes leads to pain numbness of my foot and aching of my shin, and, whilst I can live with it, it’s not exactly ideal to have an abberation like this.

This lead to me being advised by the awesome Nic Roberts (‘Velophysio’) to rest as much as possible, and, when riding, use shoes with a hole cut out around the area to releive pressure. If you look at the commuters you can see the hole I cut into them – making them even less aesthetically pleasing – as I was unwilling to destroy my lovely Factors. This advice from Nic was what i needed for recovery, but, ruined my autumn and early winter training. My miles drastically reduced in a bid to rest the injury, and when i did ride, the  result of using shoes where pressure was not being evenly distributed across the top of my foot, and footwear that was ancient and as stiff as a wet rag, lead to pains and swellings elsewhere in my foot.

Cue advice from a sports trauma doctor, who advised I return to the Factors, but pad out the area beneath the tongue around the lump as much as possible so as to relieve the pressure from the swelling, but provide a more consistent distribution of force across the whole foot. This sort of worked as an interim measure, but wasn’t ideal; I could still feel the lump being irritated by that top ratchet strap of the shoe.

Relatively new (around 4 months), a venture into the world of lace-ups and lairy footwear. Super light (the lightest currently available i believe), and with the same sole as the Factors, so, again, mega stiff.

I got these almost in desparation – the Commuters were hurting my foot in one way, and the Factors in another way. I thought that having laces would enable me to spread pressure more specifically across my foot, and, not having that main top ratchet strap would ease the rubbing on the injury lump.

This sort of worked, but i still felt issues and niggles. Cue more consultations and even an ultrasound scan a few weeks ago to ensure that I didn’t have any tendon damage. The good news was that the precious little tendons were A-OK; it was just a case of slowly letting the scar tissue reduce. Again, it was suggested to ease the pressure on the lump by padding out the underneath of the tongue of my shoes in stategic areas, but to keep using the Empires , as the other two pairs were still doing me mishaps.

Two weeks on, and it seems to be working. I still get some pain in my foot and shin, but have been told to expect this, and that i just need to monitor it closely. Over (a long) time, the scarring and pain will reduce.

So, hopefully that will work. I sometimes feel like I don’t push as hard with the injured leg, probably a sub-conscious way of my body trying to dodge pain (wimp). Now I’m aware of this, I can address it.

And so, to bring this winding tale to a close, nearly 6 months after Haute Route, I feel like i have some sort of solution and plan to move forward and start training properly. Let’s hope it works. Like I said to start, you don’t think about things like this til it starts going wrong.

P.S. Mr Giro – email me and I will send you my bank details for my sponsorship fees. Ta.