If you’ve read any of my recent blogposts, you may have noticed that in my ‘season planner’ thing I had a couple of Haute Route promo rides scheduled in.

These are rides set up by ambassadors with the intention of bringing together local cycling communities, and getting them on a ride hosted by an ambassador (and typically a bike shop or café), with a view to giving them a chance to meet past and present riders and speak to ambassadors about their experiences. So, a bit of a taster of the real thing I guess.

I ran two of these in April, and thought I’d give you a real quick insight into how these went. 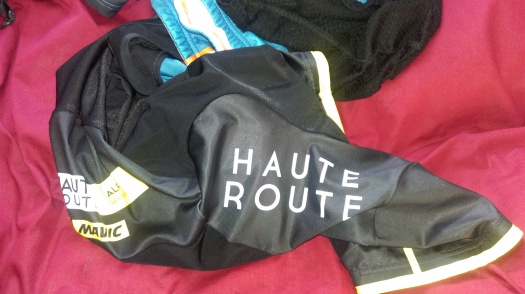 I was quite pleased that I scheduled this in first, as it gave me a chance to ride on my local roads and typical training ground, and thus somewhere that I was comfortable and familiar with. This was quite important to me as it was looking like I’d be the only ride leader on the day.

Despite over 20 signing on to the event on the eventbrite ticketing page, the turnout was slightly underwhelming at around 12-15. However, it was great to see Matt from OC Sport (the organisers of Haute Route) there, along with a couple of friends from Broleur CC and a mix of first time registered Haute Routers, veterans of the events, and those with a keen interest in signing on to 2016.

After a pretty brisk rampage up Layhams’ lane (the cycle superhighway out of suburbia that is ridden by nearly all SE London cyclists) and romp up and over Beddlstead hill, it became clear that the group needed to split. So Matt from OCS kindly took up the mantle of taking a slower group – being a local to the area he was confident of the route and happy to help out. So we split down into a group of around 8 with me, and 5 or so taking a more relaxed pace with Matt.

The ride I lead went really well, with a very strong group, including an ex top 50 finisher, a new signee to the Dolomites and myself taking strong turns on the front along flatter sections, and then balls out, head popping attacking from all on the punchy cols of Kent. It was pretty intense…trying to keep up with the other whippets in the group up the hills certainly put me on the rivet!

We had a swift stop for coffees and cake at Westerham Cyclery, a great new shop and café in the tranquil environs of Westerham, before a final 90 minutes of carnage back to Cadence. We got to have a good chat about training and tips for Haute Route in the cafe, with the other Haute Route alumni and myself imparting some nuggets of brilliant wisdom and  almost metaphysical insight (or so i like to think).

It was a great spin, and certainly a punchy one. It was a bit of a shame there weren’t more out, but the unseasonably warm and bright weather on the day lead to many deciding to do their own things I think. Thanks again to Matt Holden for being a legend and chipping in on leading the other group. 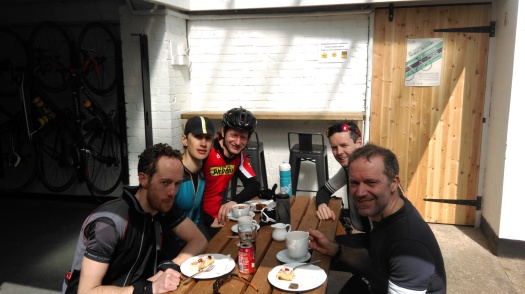 30th April – Ride in the Chiltern Hills, with help from Athlete Service, Henley on Thames

Having gone out to Tenerife on at training camp set up by Athlete Service, and from getting to know the guys that work there and live in the area, I knew this would be a great location for a ride. The Chilterns is a beautiful part of the world that I’ve ridden in a handful of times previously, and it seemed that there was a really strong  cycling community focussed around the shop that would help generate interest.

I was lucky enough to have a lot of help in setting this up from local boy Paul Piglet Hamblett (a Haute Route superstar of sorts, with a list of palmares longer than the list of excuses I roll out after a bad session), and Laurence from Athlete Service, both of whom I befriended in Tenerife.

There was a great turnout for this one, with a round 25 showing up on the day. Despite being bloody cold for late April, it was a glorious sunny day that just begs you to get out on the bike. Again, there was a good mix of local riders, and those who had travelled for nearly an hour by car to turn up. Those attending included previous Haute Route competitors, those newly signed up for 2016, and those toying with the idea.

Paul Piglet and Nick, (another friend from Tenerife and HR Alps alumnus) set a hefty pace up the initial drag charmingly named ‘Pishill’, which naturally split the group. Being local, it made sense that Paul took the longer, faster ride, and I used my Garmin and common sense to get a shorter more sedate group around the shorter route.

Paul put together a great parcours that let my bunch stick together nicely throughout, wit hte exception of an all out effort up Aston Hill from everyone. I just sat on the front the whole way around, leading my little flock around the stunning roads at a pace that was, as far as I was aware, about right to keep people moving, but not put weaker riders in difficulty. It was a little frustrating at times not being able to push on a bit faster, but it was a great chance to make new friends, chat about Haute Route, and remember what it is that first gets you into cycling; the love of being out in the countryside with your head up, enjoying the views and tranquillity.

On our return to Athlete Service, Laurence started knocking out coffees and cakes left, right, and centre to all the hungry riders (with the longer group coming in about 45 minutes after us). There was a great atmosphere in the shop with everyone mingling and shooting the breeze. A few riders took the chance to give me a good grilling about the Haute Route, asking for loads of advice and tips, which was great! I’m going to write these up on this blog in the next few weeks… so keep your eyes peeled on some inexpert advice from the stringy mountain goat (me).

Also, from a personal perspective, it was great to get the opportunity for Laurence (a qualified Chiropractor / potential wizard) to look at the issue I’ve been having with scarring on my ankle (discussed further here). He treated me for around 30minutes, and this involved a bit of diagnosis and testing my flexibility and range of movement, then a brutal 10 minutes or so of him breaking down the scar tissue on my foot with what felt like a spoon covered in sandpaper. This basically felt like a tattoo, and served to break up the main lump of scarring, which was causing me pain, into lots of small fragments. Indeed, this 10 minutes of torture was so bad it’s scabbed over! But it’s all good.. tough lovin’. He also showed me a load of stretches and home treatments that I could perform to both continue to break down the scarring and to keep the tendon beneath the scarring nice and supple. I write this piece a few days and a couple of long rides totalling 150 miles after this treatment, and my foot’s felt the best it has in months. Long may this continue! Touch wood fingers crossed etc etc.

So, two very different Ambassador rides, but both very successful. I may be organising one more (probably in SW London / Surrey) if I can fit it in around other commitments, so will keep you posted!